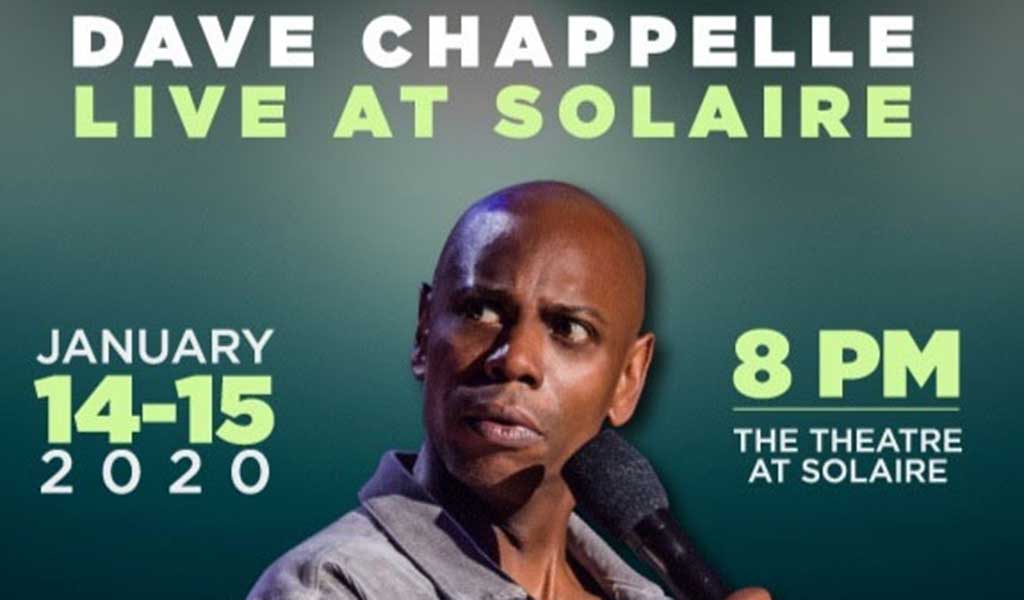 American comedian and actor Dave Chappelle brings his award-winning comedy to Manila for the first time at The Theatre at Solaire Resort and Casino for two nights!

Arguably the most-touring comic on the circuit, Chappelle has performed more than 1,600 concerts worldwide in the past four years, selling out shows within minutes of their announcements.

Chappelle is an internationally recognized stand-up comedian whose trademark wit and sharp, irreverent social commentary explores race, popular culture, politics, and fame. This year, Chappelle received the Mark Twain Prize for American Humor; released his fifth Netflix special, “Sticks and Stones,” and was nominated for a Grammy Award® for the same title. His four other highly anticipated Netflix specials: “The Art of Spin,” “Deep in the Heart of Texas,” “Equanimity and The Bird Revelations,” all received Grammy Awards® for Best Comedy Album in 2018 and 2019. Additionally, he captured his second Emmy® for Outstanding Variety Special with Equanimity in 2018.

ADVISORY:
No cellphones, cameras or recording devices will be allowed at this show. Yondr, the company behind the patented locked phone pouch system for phone-free spaces will be introducing its product to the Philippine market for the first time. Audience members with cellphones will be required to place them in provided Yondr pouches for the duration of the event. Anyone recording or taking photos with a cell phone inside the venue will be immediately ejected. Additionally, all material performed is copyright protected by Pilot Boy Productions, Inc./Dave Chappelle and may not be reproduced in any form.