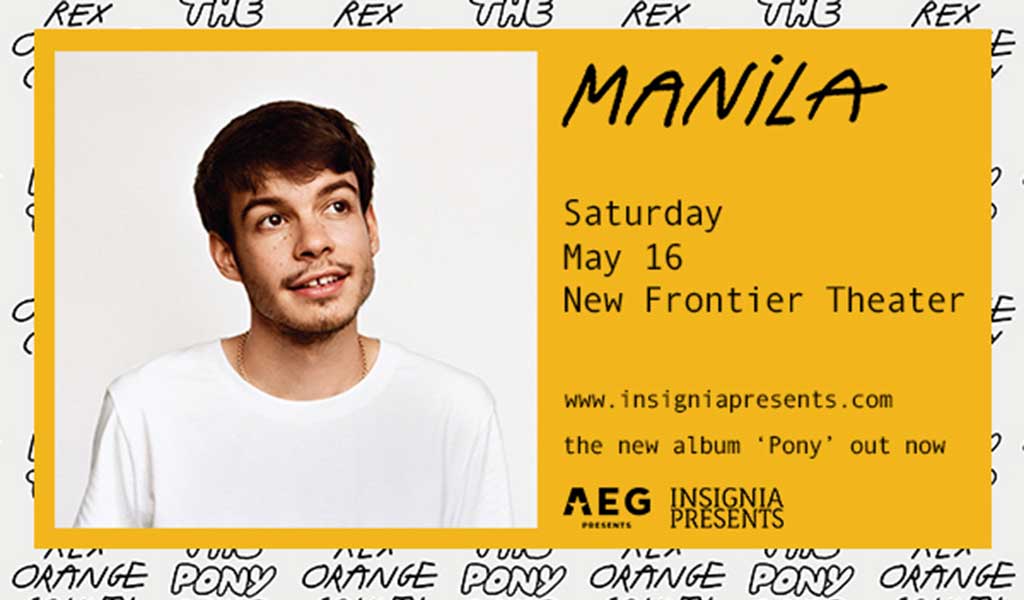 British singer-songwriter Rex Orange County will be coming to Manila through his much awaited Pony Tour on May 16, 2020 at New Frontier Theater, brought by Insignia Presents and AEG Presents Asia.

His new album Pony released in October has received widespread critical acclaim and scored him a Top 5 both in the UK and in the US. The British singer and multi-instrumentalist has just completed a sell-out UK tour playing 3 huge shows at O2 Academy Brixton and in January heads to the US for more sold out shows.

His debut album, ‘bcos u will never b free’, self-released on Soundcloud when he was barely 18, caught a wave of interest. Its lo-fi textures and hi-def emotions led to a hook up with Tyler, The Creator. He asked the teenager born Alex O’Connor to come to Los Angeles, where he wrote and sang on two tracks on the album that became Flower Boy.

Inspired, Rex turned to making his own album proper, 2017’s Apricot Princess, a beautiful, woozy, heart-shaped tribute to his girlfriend. This is followed by a Number Two slot on the BBC’s Sound Of 2018, as did lots – and lots – of touring. So he continues in that fashion and arrives on the shores of Indonesia, Singapore, Thailand, Japan, and an eagerly awaited concert in Manila, Philippines in 2020.

Rex Orange County has been gracing Philippine’s airwaves with his hits “Sunflower,” “Best Friend," and “Loving is Easy” gaining a local youthful following for his sincerely written lyrics about love, life, and maturity, accompanied by an arrangement best described by NPR’s Zoë Jones as “a blend of hip-hop, jazz, and bedroom pop.”