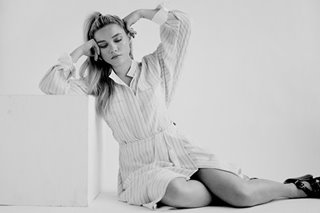 With three breakout roles in 2019 — including “Little Women,” “Midsommar” and “Fighting With My Family,” a sleeper hit in which she portrayed a working-class British girl who becomes a WWE star — Florence Pugh has quickly ascended from virtual anonymity to her current status as one of the most acclaimed actresses of her generation

Florence Pugh grew up around hustlers; she doesn’t believe in fairy tales. But there have been moments in her life when she felt like a character in a book. This happened once when she was 9 or 10, and working in the garden with her mother in Oxford. Pugh had a respiratory illness that kept her out of school for long stretches of time. At home, when she wasn’t studying or attempting cartwheels in the yard, she would help her mother with chores around the house, or in the garden, turning up weeds and tamping down bulbs.

One day, Pugh’s mother, a dance teacher, decided that they should read “The Secret Garden,” which tells the story of a sickly girl, a lonely house and a magical garden. For a long time after that, Pugh felt like her life, too, might be magic. It seemed almost as if she had slipped through the book’s pages, or perhaps crawled out from them.

Over the last two years, as an actress now living in London, Pugh, 24, has had that fairy tale feeling again, and then again, and again. “It’s weird what’s happening,” she was careful to note, over tea on a wet recent morning in New York City. And yet it was, in fact, all happening.

In the spring of 2018, for instance, Pugh, who had never appeared in an American-produced film, heard whispers that “the kings and queens of Hollywood were getting together to make a movie.” That movie was Greta Gerwig’s new remake of “Little Women,” which would pair her “Lady Bird” co-stars, Saoirse Ronan and Timothée Chalamet, with Meryl Streep and three elite young actresses to be determined.

At the time, Pugh was already committed to join a different kind of ensemble — in last year’s neopagan horror film “Midsommar” — and didn’t consider herself in the running. But before that shoot began, she received a phone call saying that Gerwig and her producer, Amy Pascal, wanted to meet. Soon after, a royal invitation arrived.

With three breakout roles in 2019 — including “Little Women,” “Midsommar” and “Fighting With My Family,” a sleeper hit in which she portrayed a working-class British girl who becomes a WWE star — Pugh has quickly ascended from virtual anonymity to her current status as one of the most acclaimed actresses of her generation.

In May, she’ll play a superhero in Marvel’s “Black Widow,” opposite Scarlett Johansson and Rachel Weisz. (On that film’s closely guarded plot: “Aside from the big explosions, it’s a very small and unique and painful story.”)

In a short run, Pugh has shown striking range. Watching her 2019 films back to back — an anti-trilogy of performances as precise as they are irreconcilable — is a disorienting experience. Pugh’s open, heart-shaped face, with a nose and chin that she wields like sharp implements, seems capable of infinite modulation, gliding across a vast spectrum of human emotion as smoothly as turning a dial.

Ari Aster, the writer and director of “Midsommar,” in which Pugh plays a grieving graduate student who is reborn on a trip with a bad boyfriend, told me he was taken aback by the versatility she displayed in the role. “For someone who is not classically trained, she has formidable instincts,” he said. “I think she can play anything.”

Because she is not yet widely known, the disappearing act Pugh has achieved in her films has sometimes fooled moviegoers, who fail to recognize the work of a single actor.

“I’ve had conversations about films with people who had no idea that I was in them,” Pugh said, clearly delighted. “I love that. To me, that’s acting. It’s like, OK. It worked.”

Gerwig, who delayed the shooting schedule of “Little Women” so that Pugh could finish “Midsommar,” told me she needed someone who could pull off her renovation of the character Pugh plays in the film, Amy March, the youngest and historically most hated of the four March sisters.

For 150 years, Amy, who prizes her appearance and is vocal about her aspiration to marry rich, has been portrayed as the villain to the soulful and rebellious Jo March, a timeless literary heroine played in the film by Ronan.

Gerwig’s script, as realized by Pugh, unsettles that dynamic. We come to see Amy as a different but no less admirable flavor of hero, one who is determined to capitalize on the cards she’s been dealt.

“I found evidence in the book that Amy was Jo’s equal, but I had never seen her explored in that way,” Gerwig said. “I knew there was no other person who could do it but Florence. She has movie star written all over her, but she’s also a character actor, which is the best kind of movie star.”

Pugh grew up the second youngest of four siblings in a “wonderfully noisy and creative” house that was full of performers. Her elder brother, Toby Sebastian, appeared on “Game of Thrones” as Prince Trystane Martell, and her elder sister, Arabella Gibbins, is a theater actor, comedian and vocal coach.

“You had to shout to have your voice heard,” Pugh said of the environment. If those conditions didn’t suit her at first, they do now. “I’m quite stubborn and headstrong,” she said, with a mischievous half-smile. She added that more than a few people in the industry had described her as “feisty.” She chose different words: “I like having a fight.”

By the time she discovered “The Secret Garden,” Pugh already knew that the only thing she wanted to do was perform. The first gig she remembers was at age 6, when she played Mary in a school Nativity play. Pugh, following her muse, improvised a Yorkshire accent for the part. The gag got laughs (although not, perhaps, from the headmistress), and she realized that she liked captivating an audience.

Stephen Merchant, the writer and director of "Fighting With My Family," said he was struck by Pugh’s innate confidence while shooting the movie’s wrestling scenes. Because of scheduling restrictions, they’d had to film the climax on the third day of production, which meant some of the actors’ earliest scenes would be performed live in front of 20,000 WWE fans.

Merchant was nervous about how this would go over, until he saw Pugh’s first take. "You would have thought it was Dwayne out there," he said, referring to Dwayne "The Rock" Johnson, the thick-veined actor and former WWE star, a producer of the film. "They played the theme music and she just walked right into the ring, cool as ice. It was dazzling."

In secondary school in Oxford, Pugh struggled to focus outside of arts classes like creative writing and ceramics, a small fraction of her course load. “I don’t think I was built for school,” she said. “I just wanted to perform and make music and make pots.”

In her free time, she recorded videos of herself performing acoustic guitar covers in the style of her favorite artists, including Tracy Chapman and Damien Rice, and posted them to YouTube under the name Flossie Rose. In the videos, where she appears in an early ’10s teen-girl uniform — crimson hair, cat-eye makeup, beaded ring bracelet — the look on her face is impossibly world-weary: more veteran hauled out of retirement than ingénue in search of her close-up.

Pugh’s father, a former restaurant worker turned owner and entrepreneur, never blinked at her creative pursuits — "He’s like me: If you don’t want to do it, don’t do it," she said — but she heeded her mother’s advice and finished school. By then, she’d landed her first film role, alongside Maisie Williams, in the English girls’ school drama “The Falling” (2014) and never looked back.

The casting director of that film, Shaheen Baig, later cast Pugh in two other pivotal films: the arty period drama "Lady Macbeth" (2017), in which she starred as a subordinate new bride with hidden appetites, and “Fighting With My Family.”

"It’s rare that you find someone at that age who is so comfortable in her own skin," Baig told me. "There’s no fear or vanity; it doesn’t matter what you throw at her."

There are no fairy tales that brought Pugh to this moment, but here is a story of good luck and determination. When Baig and the director Carol Morley were casting “The Falling,” they looked at more than 200 young women to play the two lead roles and other characters at the fictional girls’ school. They initially restricted their search to London, but later widened it to Oxford (where some filming was scheduled to take place), posting calls for audition tapes around town and on school campuses.

Many of Pugh’s drama friends, who, like Pugh, had never auditioned for a real film before, were electrified by the prospect of appearing in one. But Pugh, contrary to her usual zeal for performing, ignored the postings. She’d learned from her brother’s experience that “they always cast someone famous in the end,” she said.

On the last day to submit an audition, it was her mother who intervened. She told Pugh that she should make a tape — not out of any belief in miracles, or in happy endings, but as a practical matter of investing in herself.